May 12, 2013
A friend who moved across the country wrote recently to tell me she had two dreams during which she walked past my childhood home in her new city. Once I was with her and once I was not, but both times the details were same. Here is what she had to say: 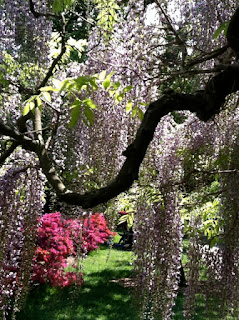 "...big yard, almost a whole block, big three story house, post Victorian and pre modern, dark green color. There are a lot of kids living and playing there, but they are not all related. There is a business on the ground floor level: dry cleaner. The front door is open. Your mother is visible behind the counter where she is running the business and giving the children brown bag lunches masterfully and with grace and joy. She looks up intuitively when we and later I am looking at her through the door. She gives a smile and wave that are ideally, accepting, loving, welcoming and inviting."


The logistics don't match my childhood, but like many dreams, there was an intuitive truth. In my reply, I said,

"I've been thinking a lot about my mom lately. She was all of those things... accepting, loving, welcoming and inviting. I was very lucky to have known her, and I miss her tremendously."

If you've been reading UG for awhile, you know that my mother passed away about two-and-a-half years ago. Loss and grief are an inevitable part of the human experience. When she died, many friends, family members and acquaintances shared stories about their losses, and over time, I've recognized bits and pieces of those stories along my own path. 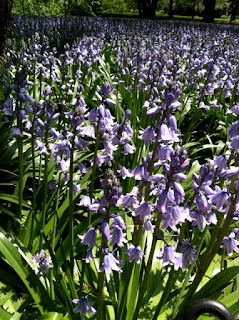 One of the revelations that I found profoundly sad after my mom died was that there would be people in my life (present and future) who would never have an opportunity to know her. I was particularly touched that my friend, who had never met my mom, understood something about her. Because dreams are often, after all, a reflection of what we already understand to be true.

And, it made me smile that, in this dream house and dream neighborhood, my mother was making sandwiches for the kids in the neighborhood. No one ever left her house hungry.

I think I miss her most in the kitchen. I always called mom while preparing for a party to talk through some culinary detail or other.

Today, I celebrated Mother's Day in a way that I think she would have liked. I went for a walk in the Brooklyn Botanic Garden and took a few photos of the prettiest flowers. And, I made potato salad and served it in the glass tulip bowl she gave me many years ago. It's an exact match to the bowl that she used to serve her potato salad.

These things, these small acts and observances, produced a revelation of their own--that anyone who knows me will indeed know something about her--whether or not they ever actually met. I miss those phone calls, but I also feel incredibly grateful for the presence she has left in my life. 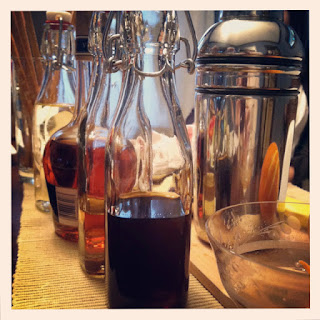 How to Start and Host Your Own Cocktail Club

"My one goal in life is to take pleasure seriously." This is a second-hand quote from an unknown donor that I have borrowed for this post because it's a fair reflection of my own philosophy. You can define pleasure in whatever way you choose, of course, but high on my list of joy-inducing activities is the drinking of delicious cocktails. Happily, I'm in the good company of fellow lush-ous ladies like LP and Trader Vicky. In the summer of 2010, we formed the NY Cocktail Club, which is dedicated to the pursuit of tasty libations. The genesis of the Club came about over drinks well mixed by a neo-speakeasy bartender at one New York gin-joint or another. We thought, "Hey! We could totally make fabulous drinks at home with our friends." And LP famously said, "It will be like book club but better!" And, indeed. It was way better than book club. We quickly grew into a group of eight, now nine, ladies who gather each month to creatively expl

Do you remember lunchtime in elementary school? I do. It was my favorite time of the school day. (I know that's no great shock.) And, if it was rumored that tater tots were in the hot lunch... well, that was a good day, indeed! I also remember that concentrating during the period before lunch was nearly impossible. I suspect that I failed to retain bits and pieces of knowledge because I was so distracted by impending lunch. (Maybe that's why I'm still terrible at geography?) As an adult, not much has changed in my ability to concentrate with low blood sugar. And so, I wanted to choose a cause of the month for September that supports nutrition for kids. How can kids focus in school if they haven't had enough to eat? Of course, today being the last day of September, I didn't spend much time doing research. I perused the website for No Kid Hungry , a campaign from Share Our Strength that's focused on ending child hunger in the US. They have several great progra 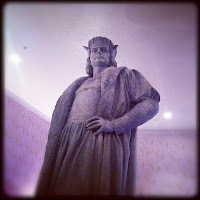 ...for your favorite gastronomer I'm a day late, but what a busy weekend I had! Saturday night I was sipping prosecco with Columbus six stories above his namesake circle at a farewell party for Discovering Columbus , an exhibit by Tatzu Nishi (brought to us by The Public Art Fund ). The artist built a living room around the statue, which was designed by Gaetano Russo and erected in 1892. It's so high above the circle it's hard to remember Columbus is even up there looking down the span of midtown and off into the sea. It was pretty darn neat to sip bubbly with him in his new living room. (Also, there were delicious gumdrops.) And Sunday, I made brunch for CM and the MEs and then helped HA prepare for her holiday cocktail club meeting. There was hardly time for posting! I know. You are not interested in my excuses. But I think you might be interested in the Bittered Baked Apple Toddies I made as a closing brunch beverage. CM was about to fly home to the great Northwe